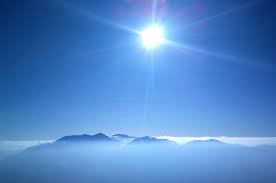 Geoengineering as it is currently being applied is mimicking volcanic eruptions. The heat is deflected both upwards and downward back into the system. Several other problems are associated with it but let’s just focus on this on area. Mt. Pinatubo erupted and secured a cooling phase for about 5 years, but the cooling from that event is now gone. The cooling is relatively transitory from particulate matter.

The reason particulates and aerosols only temporarily cool is because they still add mass to the air, which unavoidably forms a physical barrier to escaping heat waves. The heat stays in the system and continues to accumulate when there are high GHG levels.

There is only one element that can actually cool the planet according to the fossil record and we have a route to making millions of tonnes of it cheaply for an air lift operation. 5 times over oxygen has created a sustained cool down when it is sufficiently present in the upper atmosphere as an oxidant. The cooling from this drove the ice ages. So the lesson in the fossil record is that the physics problem that oxygen solves is removing mass from the atmosphere that exists because of greenhouse gases, mainly this was methane in the past.

Atmospheric chemists watch the oxidant levels and presently they are low because of a toxically saturated atmosphere. In ice ages, the oxygen levels were elevated. In order to initiate real and lasting cooling, we simply need to add to the oxidant levels over time and monitor the removal rate of the GHGs.

We don’t have to subject ourselves to the pitfalls and death tolls caused by geoengineering. The expense of geoengineering must include the cost of all of the plant and animal and human morbidity, and the damage to the ozone layer. If we do not face this soon, we are committing murder and suicide. Who will be healthy enough to operate a cool down if we don’t get started? With oxygen there is hope and life, and cooling. Are we going to choose a better solution?