The fossil record shows both Methane and CO2 in the sequences of glaciation studied By the Snowball Earth Hypothesis. The Prime actor between these two gases…Oxygen, is very important, as it is used up by Methane as Methane is broken down into CO2 and water. Here is another natural action that may not have been fully captured by the hypothesis- Once the plant matter is rotting after a cooling event which causes plant die off, the decomposition process gives off Methane which will eventually become CO2.

So we witness discussion like this, where the headline is confusing the ordinary reader.

At this point it should not be a discussion about Carbon Dioxide only- as Methane is so often the precursor gas which sponges up the cooling oxygen gas (hydroxyl) which triggers or encourages cooling of the Earth.

But this article points out that CO2 is not the warming trigger according to their assessment and also that levels were potentially very high in the fossil record- over 1000 ppm. This suggests that methane was very high-essentially up to the same ppm level to cause that CO2 level. This would cause warming by removing 6 O atoms per CH4.

The thermostat is  a relatively simple relationship between Oxygen and Methane, and now anthropogenic CO2, with a longer term,  blanketing protection from water and CO2 as Methane is broken down. The water vapor warms at lower altitude.

Presently we are injecting combustion CO2 without a Methane precursor and other greenhouse gases which also have depleted the oxygen for the ozone layer. The real impact has been the cooling action from the plant exhalation of oxygen ( that is ionized in the high atmosphere) which is well recorded. It then rots and gives Methane/CO2 which effectively rewarms.

Therefore if plants can affect this thermostat, we should look there to the oxygen and how it changed the available Methane, then that resulting decomposition to CO2 and water which then fed another cycle of plant growths, and went around again in this simple cycle. These gases were always present once plant life was here. It is the ratios which we want to check against that record in order to find the applicability.

The more powerful than CO2 gases are subject to oxidation and promote cooling ( heat venting) by their absence mathematically and physically. Their control requires oxygen, either natural or provided via direct remediation. Our problem is having all of these releasing all at once, including Methane from permafrost.

The warming caused by all of the co pollutants from combustion cause warming and are called short lived climate pollutants. However in September 2010, a Methane blowout process now occurring will be far more serious. The antidote to the Methane is one gas- Oxygen-best delivered in the form of an ion called the hydroxyl. In the fossil record, there are cases where oxygen and its oxidation of methane has caused a snowball Earth, when CO2 levels were low enough to allow heat venting. Presently we can count on only about 2’C of this cooling, but even that may be a pivotal and necessary opportunity we must take. We must seriously consider some forms of carbon rationing, either at national levels, or target high emitters, to make any cooling successful.

Many people do not know that ozone depletion is considered a cause of global warming as well and it is very significant. The Ozone-Oxygen cycle absorbs UV radiation UVB and UVC. Because the Ozone layer is depleted, this heat is getting through because Ozone is formed by default where UV can get through to oxygen. The reason this causes warming is that when UV hits oxygen or ozone at any altitude, the UV is converted to heat energy. (Madronich). If the reaction happens lower down then because it did not happen higher up, it comes with a heat conversion and heat product.

For every 1% of ozone depletion the calculation has been made that a 2% increase in temperature is happening. It is estimated that the ozone column on average is now 6% depleted in 2018, so that would translate into a 12% temperature rise, which would roughly translate into an average of 1.68 degrees in a world where average warming has already increased the temperature by 1.5 ‘C and is approaching 2’C. Almost all of the warming is accounted for in this simplified way, but the temperature anomaly is not even in distribution because the poles have greater ozone depletion than the tropics, yet we still see a close correlation.

With this kind of an ozone layer depletion baseline, and the addition of the heat being added from elevated methane levels, elevated CO2 we need to be thinking about what can we reverse. So far, with an oxygen airlift to the ozone layer we could reverse the ozone depletion and with enough oxygen, we could destroy significant amounts of methane and significant amounts of  all our synthetic greenhouse gases. Next week (August 25, 2018) we will have the logistics presentation for the oxygen airlift posted, contributed by engineer and contractor, Donald Hugh D’Arcy Evans, from Rushden, UK.

A popular industrial solvent, Dichloromethane is damaging the ozone layer over human populations. It’s already listed in the Montreal Protocol as a hazardous substance but it needs to be replaced with greener alternatives. While this solvent is classed as a very short lived substance, it is taking a large toll on the ozone layer.

When we combine this with the loading of atmospheric bromine and for every 5 ppt of that, we have an ozone loss of 1.3% and it could get as high as 350 ppt ( Impact of Very Short-Lived Substances on Stratospheric Bromine Loading, Jan Aschmann Doctoral Dissertation). Just the Bromine releases could wipe out 90% of the ozone layer.
“Several human-produced chlorocarbons not controlled by the Montreal Protocol are present in Earth’s atmosphere. Among the most abundant of these compounds is dichloromethane (CH2Cl2)—an industrial solvent also used as a feedstock in the production of other chemicals, among other applications 13,14. Unlike CFCs, which are virtually inert in the troposphere and have long atmospheric lifetimes (decades to centuries), CH2Cl2 is a so-called very short-lived substance (VSLS)15. Historically, VSLS have been thought to play a minor role in stratospheric ozone depletion due to their relatively short atmospheric lifetimes (typically <6 months) and therefore low atmospheric concentrations. However, substantial levels of both natural and anthropogenic VSLS have been detected in the lower stratosphere 15,16,17,18 and numerical model simulations suggest a significant contribution of VSLS to ozone loss in this region 19,20,21. Long-term measurements of CH2Cl2 reveal that its tropospheric abundance has increased rapidly in recent years 15,21,22,23. For example, between 2000 and 2012, surface concentrations of CH2Cl2 increased at a global mean rate of almost 8% per year, with the largest growth observed in the Northern Hemisphere (NH)21. Given that natural emissions of CH2Cl2 are small, this recent growth likely reflects an increase in industrial emissions 15. While the precise nature of the source remains poorly characterized, industrial CH2Cl2 emissions from Asia—in particular from the Indian subcontinent—appear to be growing in importance 23”   https://www.nature.com/articles/ncomms15962

These growth rates are exponential, and we seriously risk another ozone crisis in addition to the one addressed by the Montreal Protocol. In order to reduce the risk, a call to replace dichloromethane with alternatives needs to be made, and upgrade it to at least a partially-banned, controlled substance. If we do not take measures like this in the near term, we run the risk of even more dangerous UV radiation in the environment and cancelling out the benefit we see from the Montreal Protocol.

What’s worse, we run the risk of losing our ozone layer while we watch greenhouse gases and miss this very real risk which could lead to the need for an emergency oxygen airlift to replenish ozone. 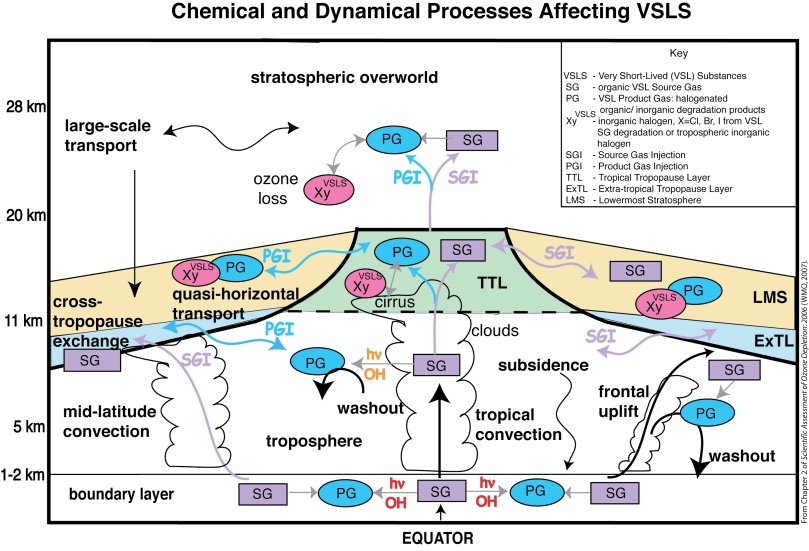 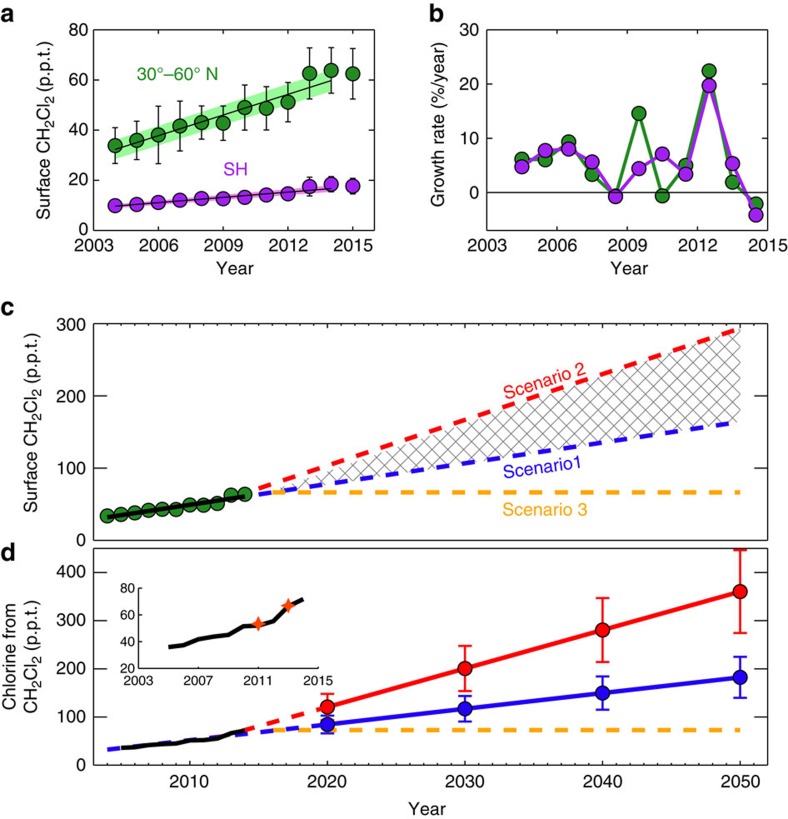