The space formerly occupied by these spiral arms is higher in energy and may be a part of why we are experiencing warming across the solar system,.

Our main greenhouse gas, which also absorbs almost all of the IR radiation, trapping heat, is affected like this by three different kinds of cosmic rays:

What Are Cosmic Rays? – Space.com

Apr 21, 2016 – Showers of high energy particles occur when energetic cosmic rays strike the top of the Earth’s atmosphere. Most cosmic rays are atomic nuclei: most are hydrogen nuclei, some are helium nuclei, and the rest heavier elements. … Cosmic rays are atom fragments that rain down on the Earth from outside of the solar system.

This is how they are presently mapped;

I invite you to look at this info graphic of the atmosphere column about how CO2 causes themal trapping or more accurately, idling. It’s a simple explanation of the physics. 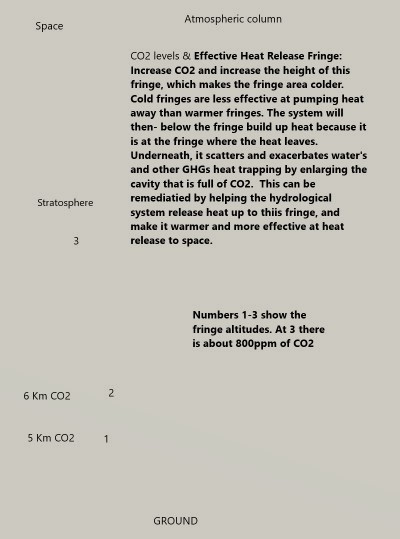 Next is the graphic of the present atmosphere’s radiation flux downward and upward. As we consider how big an effect water has and that would be an important gas to have under remedial management to encourage heat releases upwards on a regular and sustained basis. This would help warm the unavoidable CO2 fringe which is increasing in altitude, and help the warmer fringe pump heat space ward. Note also the Oxygen and Ozone- doing its critical job of absorbing UV light-these physics also need remedying by restoring this layer instead of further destroying it with either lasers or scalar radio or microwaves. These change the properties of water, artificial and weaponized nucleation processes-happening in forced locations are changing existence for our wildlife and plant heritage, and our health.
Source for image below:

There have been as noted in the fossil record, cool temperatures with CO2 levels over 1000 ppm in the past. these would be accompanied by low methane and high albedo from snow, which would radiate heat to the CO2 fringe at about the stratosphere, and this would create the “warm to cold differential” at the fringe, which would keep radiation moving outward.
For every 1% of missing ozone, we also have 2% warming increase, which has penetrated and melted the snow at the caps in part also, as they released OH* which destroys Ozone as well as it lofts in the clean air of the poles, where much less other material is using up the OH* so it more readily contacts Ozone lower down, and the Nitric Acid- Nitrous Acid cycle also became a reservoir of the OH, and destroyed it at altitude.
Without the polar ice cover, high altitude CO2 fringes are not well activated to release heat from below. There needs to be a thermal radiation flux sufficient to do this. In our present atmosphere, we also have refrigerant gases trapping heat and warming the stratosphere which also changes the thermal column profile, deviating the gradient from warm-cold to warm-cold-warm-cold and down-regulating heat release.
So, since we do have cooler periods in the fossil record, with high levels of CO2, I suggest here that this evidence is showing us that working on the other removable and easily manageable greenhouse gases is patently logical, based on the proof if this also in the fossil records. This can be performed in a controlled manner with non-toxic oxygen.
In Summary
The cosmic rays that could be quite easily responsible for 3.5’C as shown here in the galactic record,

Four switches from warm “hothouse” to cold “icehouse” conditions during the Phanerozoic are shown in variations of several degrees K in tropical sea-surface temperatures (red curve). They correspond with four encounters with spiral arms of the Milky Way and the resulting increases in the cosmic-ray flux (blue curve, scale inverted). (After Shaviv and Veizer 2003)
As we look at this next graphic from the same article, the crossing of the spiral arm is better visualized as crossing the space that the spiral arm previously occupied, and the galactic mid plane can also be described as the equatorial plane of the galaxy.

The Sun’s motion relative to the galaxy’s spiral arms over the past 200 million years is defined by changes in the angle ⌽. The most recent spiral-arm crossings ⌽1 and ⌽2 were at ~100° and ~25°. Climatic data show rhythmic cooling of the Earth whenever the Sun crossed the galactic mid plane, where cosmic rays are locally most intense. From these geophysical data, the astrophysical data shown in table 1 can be inferred. (Svensmark 2006a)
So in summary we are looking at from the cosmic ray source, a general temperature change cycle of 7 K or 7’C over these crossings. When we put this at the base of our models we can get a better perspective.
Since these cosmic rays also activate solar processes, a modeling of that relationship I am sure has been proposed, and the magnetic systems in our solar-planetary radiation belts may also be affected as all kinds of particles can traverse and up/down-regulate large- body magnetic fields. (I will research this area)
One thing may be quite certain. Our population levels can go up and down in the blink of an eye compared to these changes, as we see presently.
I would suggest that the three gases to focus on are water vapor, methane, and oxygen-in its most active forms as the management tool. Other scientists call CO2 a “baseline” for warming…I am suggesting it may be less worrisome if the other gases are managed more proactively to radiate heat, irrigate our food and filter UV rays and pollution from our environment.